The 10th Annual Soccer for a Cause Tournament 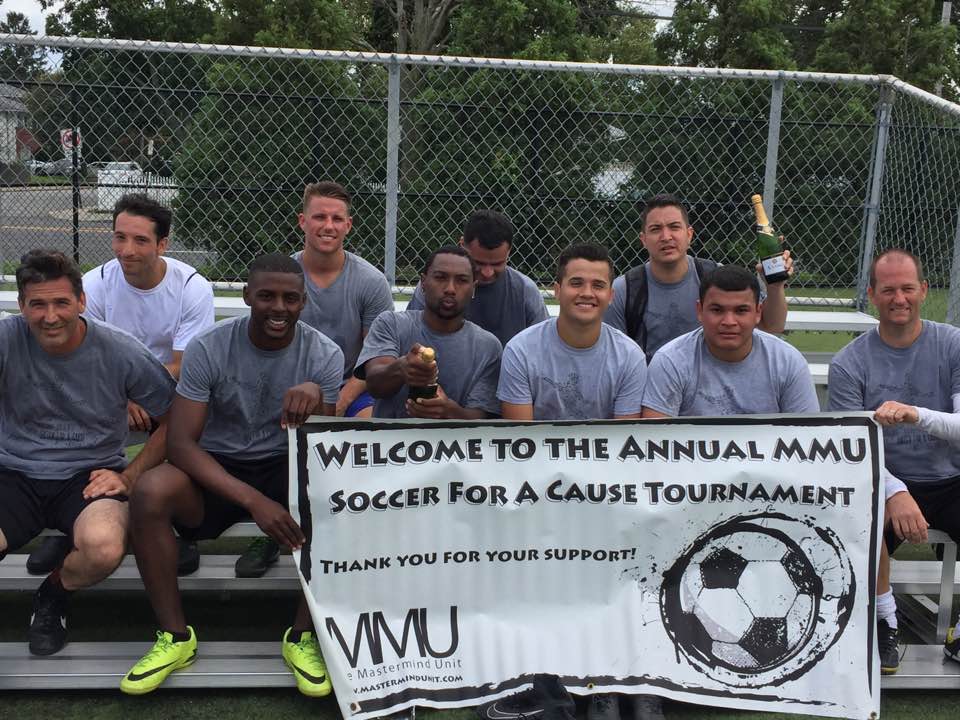 On the morning of July 29th, fickle weather was the order of the day. A spotty shower, coupled with humid conditions, could have knocked the wind out of the sails of Terrie and Paul Magro, co-founders of the Michael Magro Foundation in Hicksville. After all, the foundation’s Tenth Annual Soccer for a Cause was scheduled to kick off that morning at 10 am at Kevin Kolm Field. Much like the “Unsinkable Molly Brown”, Terrie donned a smile for an umbrella and headed out with husband Paul to greet the teams.

Although the day was still rather humid, the sun peeked out behind the clouds for the event. Of the sixteen teams present, the majority of teams came from the Tri-State region. Some participants came from as far away as Virginia, Philadelphia, Atlanta and Chicago. Over 100 team members played in the 7v7 soccer tournament, which was presented by The Mastermind Unit. During registration, each team offered a donation of $500 to play. In return, they received colorful commemorative team t-shirts and a chance to compete for a great cause. I have no doubt whatsoever as to who sent the sun on Saturday, Michael.

This year’s event was sponsored by A Vournou Construction Management Group LLC. Sysco Long Island generously donated all of the food, which was deftly handled by Chef Paul Magro and a stalwart group of volunteers from MMF. DJ Geoffrey played a variety of music for all attendees, and the mood was light and upbeat. Peak Performance Physical Therapy, with three Nassau locations, sponsored one table at the event. The other sponsored table was held by Mission Nutrition, a healthy grocery store with the added bonus of supplements and a boatload of knowledge, located on South Broadway in Hicksville.

Hicksville Fire Department was on hand to treat injuries sustained during the tournament. Terrie quipped, “I’d like to give a great big thank you to HFD for all of their help on Saturday. We certainly kept them busy.”

FIOS-1 stopped by to interview Terrie and Paul, and the segment was run throughout the day on FIOS Channel 1. Attendees milled about throughout the day and joined in the fun-filled tournament. Children played on the playground while spectators cheered the soccer teams from the sidelines. Brightly colored commemorative t-shirts were available for purchase.

Terrie gushed as she spoke of her volunteers. “I’d really like to thank all of our volunteers. Without them, these events wouldn’t be as successful as they have been.” A special thank you, courtesy of Terrie, was offered to Ed Shin, who photographed the entire tournament.

The 10th Annual “Soccer for a Cause” was a whopping success. Team Barland, captained by Jerome Barberio, took first place for the second year in a row. Second place went to One on One Physical Therapy, which was captained by George Stamatinos, PT, DPT. One on One Physical Therapy boasts 19 outpatient clinic locations in Brooklyn and Manhattan. “Thank you so much to MMU for another fantastic ‘Soccer for a Cause’ day. And thank you to all of our players!” A good time was had by all, and the tournament raised $14,000 for the Michael Magro Foundation.

Next up for the Michael Magro Foundation is their school supply drive, aptly named, “Fill a Backpack”. The event, which runs from August 1 through August 15, will directly benefit families of children with cancer and life-threatening pediatric illnesses. Rivkin Radler LLP of Uniondale is sponsoring the collection. Items needed include backpacks, folders, three-ring binders, loose-leaf paper, and pens. Donations may be made directly through Amazon at bit.ly/MMF-Backpack, or by mailing items to 12 Julian Lane, Hicksville, NY 11801. All backpacks will be donated to Cancer Center for Kids at NYU Winthrop Hospital, Hempstead Pediatric Associates at NYU Winthrop Hospital, and Pediatric Oncology out-patient clinic at Stony Brook University Hospital.

Another date worth mentioning is Monday, October 2nd, 2017. The Michael Magro Foundation will be presenting their annual gala, “An Evening of Tasting and Giving.” This well-loved fundraiser is MMF’s largest, with the highest attendance. Great food, energizing music, and raffle baskets are all part of the evening’s festivities. “An Evening of Tasting and Giving” will be held at the Carltun in Eisenhower Park from 6:30 pm to 9:30 pm. It’s all for a wonderful cause, and it’s a perfect excuse for a lovely night out.

For more information about future events or to donate, please visit their website . The Michael Magro Foundation is a 501 ©3 nonprofit organization which was established in January 2005 to honor Mike’s life. The Foundation is committed to developing programs and providing services to meet the needs of chronically ill pediatric patients, and has raised over $1.4 million for pediatric specialty programs. The tireless efforts of the Magro family and their volunteers has made all the difference in the lives of those who benefit from the foundation’s work.