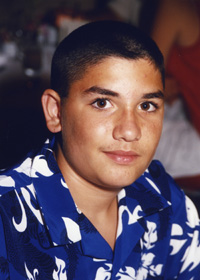 Michael Magro was a thirteen-year-old seventh grade student at Hicksville Middle School in Hicksville, New York, when he was diagnosed with leukemia (A.L.L.). He passed away within months of that diagnosis.

Michael, loved life, his family and friends. He smiled a lot and was considered a peacemaker with a zest for life and a passion for lacrosse and music; he cared more for others than he did for himself. Mike may not have been the best at everything but whatever he did, he gave it his all and never gave up. During his illness, his remarkable courage and strength were an inspiration to everyone who knew him.

The Michael Magro Foundation, a 501(c)3 non-profit organization, was established in January 2005 to honor Mike’s life. The efforts of the Foundation started with, the pediatric cancer patients and their families at the Cancer Center for Kids at NYU Winthrop-University Hospital as well as to other NYU Winthrop pediatric specialties where the treatment of chronic diseases is ongoing because that is where Mike was treated for his leukemia.

Additionally, the Foundation awards two scholarships each year; One an academic and sports scholarship is awarded, through the Hicksville High School Scholarship program to a student excelling in academics and sports; the other is a culinary scholarship endowed for a senior entering Culinary School.

Before Terrie Magro got married in 1983, her last name was Combatti, which seems almost too perfect. Combatti means “fight” in Italian—as in “Fight for your children” or “Fight to make life easier for families who are going through what you went through.” Those are two things Terrie Combatti Magro has done in spades.

To learn some more about the Magro Journey, Click Here