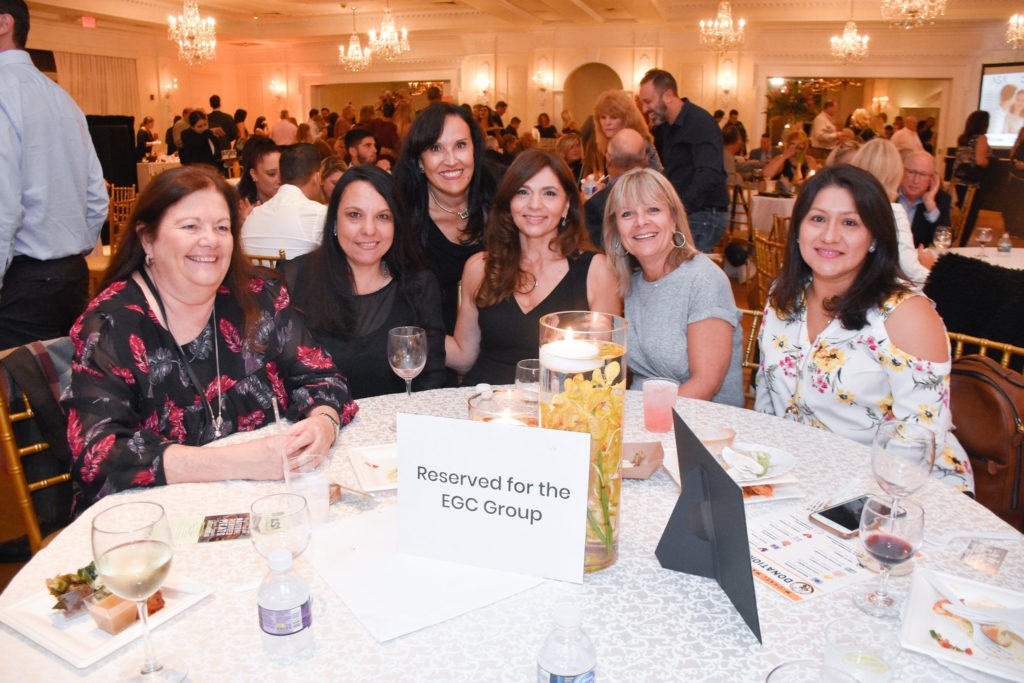 When September turns to October and the days grow shorter, most minds focus on the arrival of autumn and the upcoming holiday season. For folks like Terrie Magro, VP of the Michael Magro Foundation, it’s the busiest time of the year. Terrie, along with her husband Paul, son Marc, and their tireless volunteers, bring about an event that has become near and dear to the hearts of many who have been involved with the foundation over the years.

On Monday, October 7th, the Michael Magro Foundation presented their 15th Annual “Evening of Tasting and Giving”, which was held at The Carltun in Eisenhower Park. The event, which features local restaurants, bakeries, wineries, beer distributors and distilleries, gives attendees the opportunity to taste their fine fare, all while supporting a wonderful cause. As many from the Hicksville area are aware, the Michael Magro Foundation’s mission is to assist those families whose children are suffering with pediatric cancer and other life-threatening illnesses.

This year’s event was spectacular. A warm, inviting energy was present as attendees milled through the front doors for photographs in front of the MMF logo screen. Raffle baskets from local businesses lined the lobby, while patrons slipped tiny red raffle tickets within the brightly colored orange baskets. Baskets included a lottery ticket board, sports memorabilia, a Nespresso coffee machine with all the fixings, a beautiful wine basket, and an Italian-themed basket, complete with a bottle of Godiva liquor, to name a few. The excitement was palpable, as guests greeted each other throughout the event.

Restaurants were in abundance, so it was vital to bring one’s appetite. West End Café and Bar of Carle Place served guests as they stopped for this year’s offering: a beef short rib empanada with a rich drizzle of chimichurri aioli and Pico de Gallo. The Inn at New Hyde Park offered a butternut squash soup that delightfully warmed hearts and hands. Kingfish Oyster Bar of Westbury’s Co-Owner and General Manager Courtney Shaudel, who is the daughter of critically acclaimed Chef Tom Schaudel, offered crawfish and chicken meatballs with a lobster fricassee. Chef Tom is also co-owner of Kingfish. Margarita’s Café, along with their sister restaurant The Cuban, were a crowd favorite. Their offerings of freshly made guacamole, chicharrones de pollo and crisp tortilla chips could be washed down with their scrumptious and generous serving of Mojitos. Roast, 388, Anchor Down, Bella Vie, River Road Bistro, Seasons 52, Beginnings and TOA Asian Fusion were just a sample of restaurants present at the event. The wonderful fragrance of TOA’s beef noodle soup, which was chock full of vegetables and beef, wafted throughout the lobby. 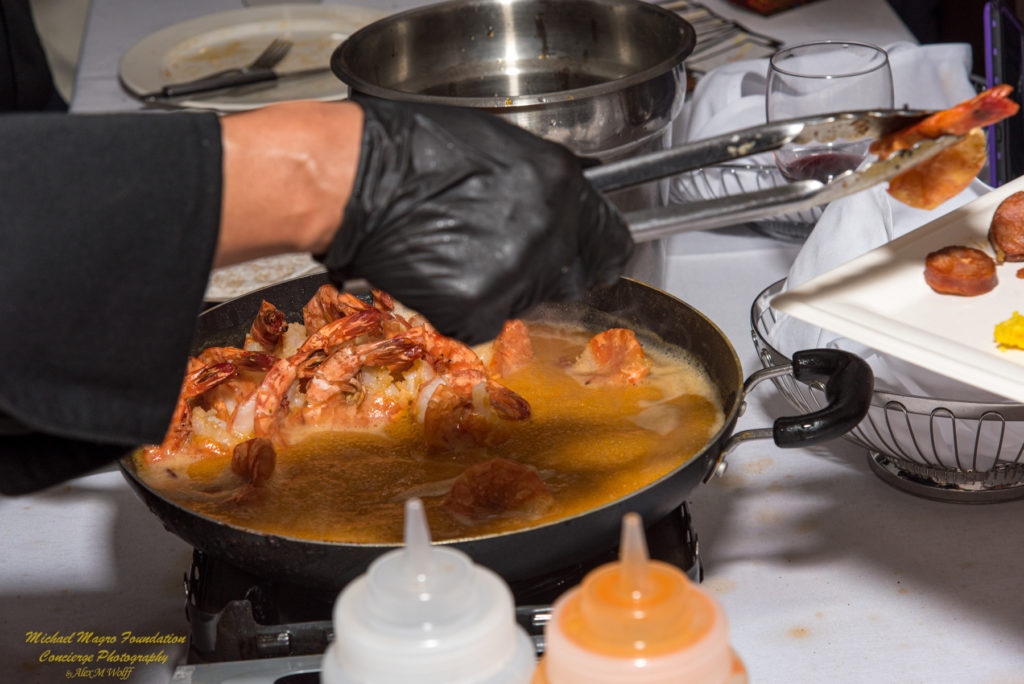 This year’s gala brought newcomers to offer samples of their wares, including David’s Tea of Roosevelt Field. JJ and Devin, who offered David’s Chai, a spicy blend served hot, and their Hibiscus herbal tea, which was served chilled, were thrilled to be a part of the event. Devin mentioned that David’s Tea is very involved with the community, which is why they were completely on board to bring their giant cambers to the foundation’s celebration of life. They also mentioned collectively that “giving back to the community is always the right thing to do.”

Doing the right thing seemed to be the running theme by those who offered food, beverage, and dessert. According to Stephen Murphy, CEO of The Murph’s Famous Bloody Mary Mix, “I’ve been a part of Terrie’s golf outings, and I like to do at least five events a year. It’s important to do the right thing, especially when kids are involved. I started with one golfing event, and it’s now progressed to five events a year.” The Murph’s Famous Bloody Mary Mix held a space at the bar next to Tito’s Vodka, which made for a beautiful marriage for those who enjoy a good Bloody Mary. Jericho Cider Mill, Sweet Karma Desserts of Plainview, and Dolce & Gelato of Williston Park were just a few of the vendors who have been with the Michael Magro Foundation for years, all of whom have stated emphatically that “we would do anything for Paul and Terrie.”

Mongo’s of Syosset was a newcomer this year, with their cold brew coffee and espresso. Their cold brew espresso martini was rimmed with just the right amount of espresso dust. They held space at one of the bars with Jose Cuervo Tequila, which offered free t-shirts and caps to those in attendance.

Del Vino Vineyards, a new winery in Northport, as well as US Beverage and Twizzle’s Tasty Treats, were also newcomers to the “Evening of Tasting and Giving”. Babalu, a Cuban restaurant in Huntington, arrived for the first time with some tasty ethnic treats, as well as Roslyn’s 388 Italian Restaurant and Bay Shore’s Belle Vie. According to Kevin Long of USBeverage, who brought excellent hard ciders by 1911, “We’re going to be here every year from now on. We really loved the idea of coming in and doing good. It’s important, because we want to donate to a really good cause, and this is one of those really good causes. It’s also the right thing to do.”

After the dining and tasting portion of the evening was complete, guests were treated to a rousing speech given by Terrie Magro. After welcoming her guests warmly, Terrie stated, “The Michael Magro Foundation thanks all of our wonderful volunteers. We would also like to thank our restaurant, beverage, bakery partners, and Dr. Louis Pannullo, for bringing our entertainment this year.” With so much love in her voice to the point of cracking, she stated, “Cancer and children should never be in the same sentence. Both of our sons were diagnosed with cancer, within months of each other. We are so very grateful for Marc, as well as the other cancer survivors in this room tonight.” The focus for the event this year, which was to get new people involved for the future viability of the foundation as well as to educate new attendees, was felt deeply by guests, who could be seen wiping their eyes. As Terrie stated, “The best part of the night is seeing everyone enjoying and interacting. I’m amazed by the high energy throughout the whole venue. Everyone is smiling, loving the food, meeting new people, loving the entertainment. It’s what it’s all about. It’s such a blessing.”

Honorees this year were Tom Galati and Larry Ruisi, who have been on the Board of Directors for many years. Mr. Galati shared a story with guests of his involvement with MMF, which has since trickled down to his daughter. Vanessa Galati began to collect seashells on the family’s trip to Montauk. She began to paint and sell the shells on the beach. The young philanthropist raised $50 for the foundation in 2017. In 2018, that number doubled. Because of her father’s involvement with the foundation, she learned the great gift of service to others by example.

Larry Ruisi, who also runs 3C (Cars, Community, Charity), had a personal story to share as well. In 2018, his nephew and father-in-law passed away. When Larry’s mother-in-law found out that Larry was being honored for his continuing efforts to assist children with cancer, she donated $3,000 to the foundation in his honor. Larry, who is a philanthropist, came to the foundation through Tom Galati. Larry’s foundation runs car shows for charity, and he and Tom ran the MMF Car Show this year. Because of their efforts, the event raised over $13,000 in 2019, the highest amount for a car show with MMF.

This year’s star-studded entertainment included performances by Alison Luff of the Broadway musical, “Waitress”, Jeremy Hays of “Phantom of the Opera”, and singer/songwriter Sophie B. Hawkins. Dr. Louis Pannullo accompanied the performers, who delighted captivated guests. The event is booked for 2020 on October 5th. This year’s event also premiered a digital version of their journal.

Next up for MMF is “Raise a Glass for Hope”, which will be held in South Florida on November 13. The event will benefit the Golisano Children’s Hospital of Southwest Florida in Naples. In November, the MMF “Adopt-A-Family” program commences, which will benefit patients at NYU Winthrop/Cancer Care for Kids and Stonybrook Hospital Pediatric Oncology Center. The next big event will be the MMF Magro Madness 3V3 Basketball Tournament at Hicksville High School on Saturday, March 8th, 2020.

The 15th Annual “Evening of Tasting and Giving”, which saw approximately 550 guests, raised over $95,000 to help children with cancer and life-threatening illnesses and their families to meet the financial demands of their illnesses. Whether a gift card for transportation for treatment or to purchase groceries, The Michael Magro Foundation is there to help, with a heart full of gold and lots of love. If you would like to know more about their mission, please visit their website at www.michaelmagrofoundation.com.