If you were to list all the connections that the Michael Magro Foundation has made since 2005, you’d find yourself easily running out of paper. The foundation, which hosted its Fifth Annual “Magro Madness” 3v3 Basketball Tournament on March 2, has been connected to over one hundred different businesses and restaurants since their inception. It seemed perfectly logical for Jimmy Montana, chair of the event and MMF board member, to connect with the wheelchair basketball coach at the Henry Viscardi School in Albertson. This year’s event was the first for the wheelchair basketball team, which consisted of five players who competed against five able-bodied students in wheelchairs to play an adaptive exhibition game in Hicksville High School’s small gym. 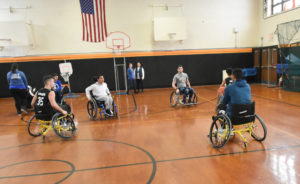 The adaptive basketball game, which featured baskets placed at 2, 4 and 8 feet, were vital to the game’s success, according to wheelchair basketball coach Joe Slaninka. “We set the baskets at different heights, depending on the disability. Each basket is just like regular basketball: they’re worth 2 points each. Different heights give players with severe disabilities the same advantages as able-bodied players. It creates an even playing field, and the kids really enjoy it.” Coach Slaninka, who has been at the Henry Viscardi School for 26 years and credits wheelchair basketball as a positive influence on his life, mentioned that each of the players might suffer with very different disabilities, but they can still play together as a team. As Coach Slaninka stated, “We’re looking to raise disability awareness in the community and region at large. Basketball is basketball, and we’re always looking for avenues to showcase our game in order to raise awareness. Playing against able-bodied kids is great, because it gives able-bodied kids a real perspective on the challenges that kids with severe disabilities face daily. I’m so appreciative of the opportunity to show off our team to new people, because my kids have fun and people learn. If there’s an opportunity to play ball, we get ourselves there.” Go, HV Cougars! 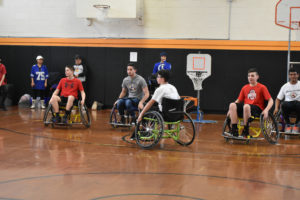 The gist of the game is simple, but it’s quite difficult to manage. After two pushes in the wheelchair, the player must dribble the ball. It might look easy, but it requires a great deal of dexterity to manage dribbling and self-propelling. Three pushes constitutes a travel down the court. One thing is quite certain; both able-bodied players and differently abled players enjoyed themselves and were able to play together with ease. As anyone who has attempted to push themselves in a wheelchair knows, it requires a great deal of upper body strength to coordinate merely moving the chair. Dribbling a ball while pushing oneself in a wheelchair is basically a Herculean feat, and it’s a lot tougher than these kids made it look. I can personally attest to this, because Coach Slaninka gave me the opportunity to play. Kudos to all team players for a job well done.

Ed Hebron, co-chair of this year’s 3v3 event, was the main connection between the Michael Magro Foundation and the Henry Viscardi wheelchair basketball team. Ed was responsible for their presence at the event, as Joe Slaninka and Ed Hebron were past acquaintances with a love for basketball. According to Terrie Magro, VP of MMF, “Having the Henry Viscardi wheelchair basketball team as a part of today has worked out so nicely. Their presence gives spectators a tremendous appreciation for people with severe disabilities. It’s really been a lot of fun to watch, and it adds another dimension to what we’re doing here. There’s so much to be done to make people aware, and we’re really excited about helping people to understand.” 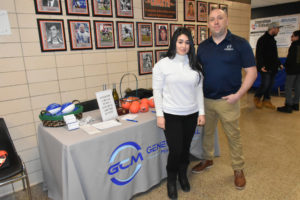 Geneva Capital Management, headed up by brothers Joe and Tom Geneva, was the event’s sponsor for the second year in a row. Joe Geneva, who has been on the board of the Michael Magro Foundation for five years, mentioned that volunteering has been a large part of his life. “I grew up volunteering. It’s a pleasure to be a part of the MMF board and sponsor this great event. I participate, but I also raise donations for the foundation.” Joe mentioned that his brothers grew up with Marc Magro, Terrie and Paul Magro’s son. “We’ve been family friends for years, so this just seemed logical for me to get involved. I’m so excited to be here, and I’m honored to be able to give back to the community as ‘just a local Hicksville guy’.”

Raffles were available on several tables outside of the large gym, which featured baskets that included NY Knicks tickets, NY Rangers tickets, NY Islanders tickets, a basket with a gift card to Peppercorn’s, and a “beach basket”. The “beach basket” featured items that could be used in the warmer weather, a welcome sight for such a snowy, frigid day.

This year, basketball teams from as far away as Connecticut played in a 3v3 showdown. Each team played three games each, and champions of each age bracket received a commemorative t-shirt and their photo on the foundation’s Facebook page. The gyms were abuzz with excited energy from spectators and players alike.

A table outside the large gymnasium featured Allstate Insurance Company’s Robert Giordano Agency, which opened on W. Nikolai Street in November of last year. The agency is 2019’s Long Island sponsor for Operation Kidsafe, which provides Amber Alert Ready Child Safety forms for children in the United States and Canada. Operation Kidsafe is a free service for families, which offers fingerprinting on a digital format. This enables a child’s fingerprints to be readily available to hand over to law enforcement in the event of an unthinkable emergency. Digital equipment was available on-site for attendees, and services were offered free of charge. 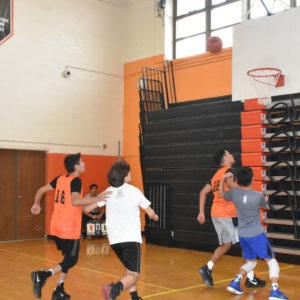 The basketball event raised over $8000 this year, which will be used to support local families who are undergoing extreme stress due to a child who is battling cancer or a life-threatening illness. Next up for the Michael Magro Foundation is their annual fishing trip out of Captree State Park, which is slated for mid-May, although a date has not been set. The foundation’s annual golf outing is set for June 6. The largest event of the foundation’s calendar year, “An Evening of Tasting and Giving”, will be held on October 7.

For more information about upcoming events, or for information on how to volunteer or donate, please visit their website at www.michaelmagrofoundation.com. The Michael Magro Foundation is a 501 ©3 nonprofit organization that is committed to developing programs and providing services to meet the needs of chronically ill pediatric patients.