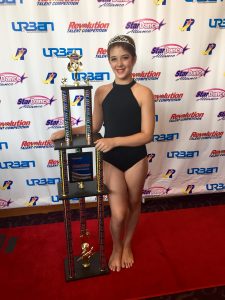 Watching Stephanie Consiglio leap and spin is a sight to behold. The eleven year old dancer is a testament to the power of positivity. Diagnosed in December of 2015 with stage-3 germ cell cancer, she called upon her positive nature and focused on her passion for dancing as her buoy in the storm. As she and her mother, Lori, sat in the hospital for her first chemotherapy treatment, Stephanie turned toward her mother and said, “Cancer has messed with the wrong dancer.”

“That first day of treatment was really long,” noted Lori. She went on, “Not only did they give Stephanie her first chemo treatment, they first had to install the port that would be used for all of her treatments.” After more than eight hours in the hospital, Lori felt a bit shell shocked as any mom would when dealing with a child with an illness. Stephanie, however, was unwilling to let cancer have the day. On the way home, she requested they stop at the dance studio, where she took lessons and practiced her art.

Things haven’t always been a fairytale version of treatment. Stephanie soon lost her hair from her treatment, as is often the case. Dancers typically have long hair, so this was difficult to accept, particularly at one competition where her hair was falling out backstage before her performance. Nausea and bad days made keeping a smile a challenge on some days. Lori, who has been diabetic since her adolescence, had some challenging moments of her own. Further, she had to take a leave from her teaching position to care for Stephanie, which added significant financial stress to the picture. Not only would this financial stress impact their everyday household expenses, it also meant there would be no money for Stephanie to travel to national dance competitions. With all of these ingredients to the recipe, you would think the result would be a sad ending. You could not be more wrong.

Lori reconnected with Marie Larson-Frazzitta, a Nurse Practitioner with whom she became friends years earlier. Marie saw Lori’s social media post about Stephanie’s cancer diagnosis. Over a long conversation about everything the family was contending with, the inability to compete in Nationals came up. Marie decided to intervene. A personal friend of Terrie Magro of the Michael Magro Foundation, Marie connected the two women to see if there was a way for the Foundation to be of assistance. Terrie immediately knew this was a perfect fit for the Foundation. Shortly thereafter, Lori received a call from Terrie letting her know a check was on its way to underwrite Stephanie’s trip to Nationals in July.

While there, Stephanie told her mom that she was ‘going for title’- the competition’s top placement. Taking 5th place for her solo and 1st place for the improvisation battle, Stephanie was selected as one of the finalists to compete for title. Following her final performance, she received a standing ovation from the audience and the judges. She took home first runner-up for the competition.

Stephanie and Lori are both grateful to the doctors and medical team at Cohen’s Children’s Hospital for working around the competition schedule for the chemo and other medical treatments that went on for more than six months. With them in her corner, Stephanie managed to compete throughout the season while undergoing treatment. She has won countless awards, a scholarship from one of the nation’s largest competition companies, and lived one of her big dreams, becoming a Shark Cookie model. Make-a-Wish made a trip to the west coast for a photo shoot with renowned photographer Shark Cookie possible. After that memorable day, he asked her to stay on as a model and participates in his shoots wherever possible.

Today, Stephanie is finished with treatment and has begun the 7th grade in Queens, NY. She is a Children’s Miracle Network Ambassador for Cohen’s Children’s Hospital, has performed in a recent music video to be aired on YouTube, has modeled for Sadie Jane dancewear, and performed at Radio City Music Hall. Her hair is growing back, her smile is wide as ever, and she sees the world for all of its possibilities.

There are still tough days and difficult choices to be made as the family works to get back on its feet. But Michael Magro Foundation has stepped in once more to make it easier. Over lunch with Terri and Paul Magro, Stephanie and Lori were delighted to learn that the Foundation was underwriting one additional dance-related trip. There were smiles all around. Clearly, Stephanie’s mantra of “Cancer messed with the wrong dancer” is contagious.

Long after Stephanie has put cancer behind her and the family has successfully moved on from this chapter of their lives, their friendship with the Magro’s will last. They will have used this difficult time to forge a friendship and make a difference. In the end, they are kindred spirits believing in the power of positivity.

The Michael Magro Foundation is a 501(c) 3non-profit organization founded by Paul and Terrie Magroto honor the life of their son Michael, who passed away from leukemia at the age of 13. The Foundation works with the Cancer Center for Kids at Winthrop-University Hospital, Stony Brook Children’s Cancer Division, andother Winthrop and Stony Brook pediatric specialties where the treatment of chronic diseases is ongoing. The three key programs offered are: Life Essentials [helping families struggling financially during their child’s treatment with non-medical expenses]; Project SOAR [providing support for childhood cancer patients, families, students and teachers when the patient returns to school following long illnesses]; and Bonding With Baby [helping siblings of babies in the Neonatal Intensive Care Unit (NICU) communicate and bond safely].