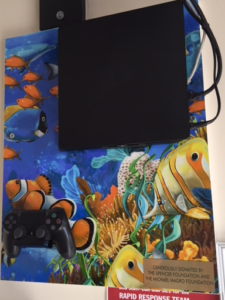 Tuesday, February 20, 2018: Stony Brook Children’s Hospital now has 4 PS4 consoles installed in patient rooms, with two more coming soon.  Each mounting board has a plaque recognizing the console as a donation of The Spencer Foundation and The Michael Magro Foundation.  Joan Alpers, Director of Child Life Services, thanked the Foundations, saying “You are making a huge difference for us. This good work will last a long time.” 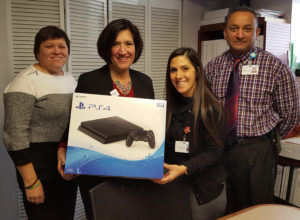 MONDAY, JANUARY 15, 2018: The Spencer Foundation and Michael Magro Foundation delivered 4 new PlayStation 4 consoles to NYU Winthrop Hospital. We also held a workshop to help the hospital’s Child Life and IT staff plan to set up PlayStation Network accounts, configure the consoles, and purchase and download games. 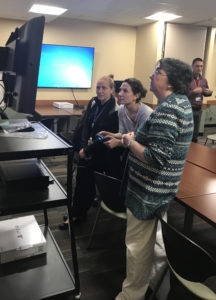 MONDAY, NOVEMBER 20, 2017: The Spencer Foundation and Michael Magro Foundation delivered 4 new PlayStation 4 consoles to Stony Brook Children’s Hospital. We also held a workshop to teach the hospital’s Child Life and IT staff how to set up PlayStation Network accounts, configure the consoles, and purchase and download games. 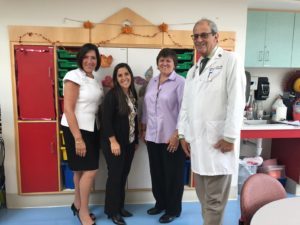 WEDNESDAY, SEPTEMBER 20, 2017: Terrie Magro and Jeanine Spencer of The Spencer Foundation met with NYU Winthrop Hospital to discuss expanding the Operation: Playcation! program to bring PlayStation 4 consoles and games to patients in their pediatrics unit.  They are pictured here with Nicole Almeida, Director of the Child Life Program, and Dr. Leonard Krilov, Chairman of Pediatrics. 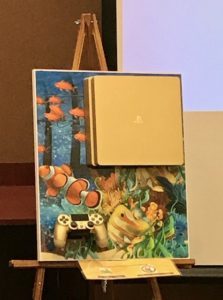 FRIDAY, AUGUST 11, 2017: T Jeanine Spencer and Sue Porter met with the Stony Brook Child Life team and discussed the children’s reactions to the consoles and games. Their IT team presented a conceptual design for an improved method for mounting the consoles in patient rooms, including a stand for mounting the controller while it’s being charged. The backdrop design is in keeping with the aquatic décor that will be used throughout the new hospital building. Child Life and IT will review user account management options to determine which best meets their needs before we deliver additional consoles.