A New Stroller for Robby Triwble 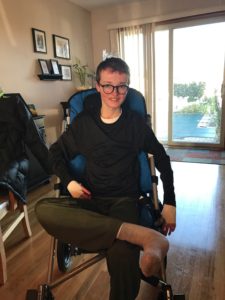 Robby Triwble is a 15 year old high school student who was born with Epidermolysis Bullosa. When he was born via c-section, the doctors discovered that he had no skin on either of his legs. They had never seen anything like this before and were shocked. As the doctors performed more and more tests, Robby started losing more and more skin from his body because the tape they were using kept ripping his skin off.  It wasn’t until a couple of days later that a doctor from Korea doing her residency at North Shore Hospital said that she had seen the very rare skin condition before and knew what is was. They said he would never be able to leave the hospital because of the high risk of infection but here he is today, 15 years later.

Epidermolysis Bullosa or EB for short, is a rare skin condition- 1 in 50,000 people have a form of EB, but in Robby’s case he is one in a million. He has a recessive dystrophic mutation which means he received the gene from both his mother and father. Due to this, 75% of Robby’s body is covered in bandages and it takes around four hours every day to dress and change them. This disease doesn’t just affect him externally but internally as well, causing blisters on his organs. Any friction created causes a blister so eating is very difficult for Robby. Robby’s oral cavity is slowly closing and his tongue is fused to the bottom of his mouth so, he has his good days and his bad. When he has his good days and eats orally they make sure he consumes as much food as he is able to.

As of right now there is only treatment and no cure for EB, but with each day they are getting closer to finding a cure for EB though research and experiments. Robby is currently on a waiting list at Stanford University in California where they will take a biopsy of his skin and inject it with collagen which his body does not produce. After they genetically correct it they will then transplant the skin back on to part of his body. If the transplant is successful, Robby’s body will then start reproducing the collagen and he will be cured from EB. There was a similar experiment in Germany and the boy who received the transplant is now producing collagen seven throughout his entire body.

Robby doesn’t always use a stroller but he does use it five to six times a week. The stroller makes it easier to get around in airports when traveling to the Cincinnati’s Children’s Hospital.

There, they have an Epidermolysis Bullosa clinic where they treat patients with EB and perform tests and treatments. At the facility, all of the doctors and nurses know Robby and it is comforting for him because there are other children there with the same diagnosis. The stroller that Robby often used was falling apart and difficult to maneuver and sometimes the family had to leave Robby at home because due to tight schedules they didn’t have enough time to transport the stroller. This old stroller was also uncomfortable for Robby and due to the recent development of Osteoporosis he needs something that is cushioned and comfortable.

After hearing Robby’s moving story, Terrie Magro felt like she had to step in and touch the lives of the Triwble family. Due to the long and complicated process of getting a new stroller through the insurance company, Terrie thought it would be great to improve Robby’s and the family’s lives by gifting them a new stroller. This new stroller is lightweight and custom fitted to Robby’s height and weight to ensure that he is comfortable. With this stroller they are able to close it quickly and easily and bring it anywhere due to its compact size. The school where Robby goes  is very accommodating and he is able to leave class a few minutes earlier so that he can walk the short distance from class to class. But if it becomes harder for him to walk in the future he will be able to bring this new stroller to school instead of using the small wheelchair he currently has at school.

Robby and his family were overwhelmed with joy when they received the new stroller. One simple touch reduced some of the stress and financial burden the family has.

Kathy, Robby’s mother, is beyond grateful to see her son keep a positive attitude even though his circumstances are tough. “He get up every day and ties his own shoes and goes to school because he wants to”, Robby doesn’t let the disease stop him from living life to the fullest and he definitely doesn’t let it define him. Robby has this amazing personality and smile that fills up the entire room. And he also has a sense of humor that will leave your stomach hurting from laughing so much. But his bright personality is what got him noticed by many famous celebrities. When he met David Wright at a baseball game, he asked if he knew Ellen and Justin Timberlake. A reporter nearby overheard Robby and covered a story on him. Later on Robby had the chance to meet Justin and Ellen on several occasions and he even made an appearance on her show. Robby also has a passion for Broadway shows and everything pertaining to Broadway. He is able to tell you every fact about each show, including who starred in it and which theater it played in. Robby has a goal of seeing 50 shows before the age of 20, even though he has seen well over 40 shows already. On his spare time, he enjoys playing video games, his favorite game currently is NBA 2K18. Any portable video game system is ideal for Robby because he is always traveling so that is why the Nintendo Switch is on his wish list this Christmas.

Although Kathy just met Terrie Magro the day the stroller was delivered, she describes Terrie as her hero. The Triwble family will forever hold the Michael Magro Foundation close to their hearts and they are honored that they are able to share and remember Michael’s story through Robby’s stroller. The strength and support from other families brings comfort to Kathy and motivates her to keep going, that she’s not alone.