Two local charities, the Michael Magro Foundation and the Spencer Foundation, are teaming up with Molloy College business students to stream games on Twitch.tv.
By Ken Schachter
kenneth.schachter@newsday.com 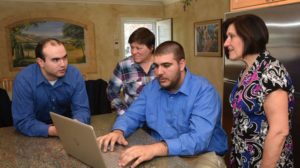 What emerged is “Operation Playcation,” which is scheduled to run from noon to midnight Friday on Twitch.tv, a web site owned by Amazon.com. Twitch streams let viewers watch as skilled players play games online.

The goal is to raise funds to install 60 PlayStation 4 game consoles, games and controllers for the pediatric units of NYU Winthrop Hospital and Stony Brook University Hospital. About 15 already have been installed, said Spencer Foundation president Jeanine Spencer, who estimates the total cost for 60 at about $40,000.

Nick DaSilva, a 22-year-old Molloy student majoring in business management, said Terrie Magro, president of the Magro Foundation, came to a class in search of ideas on widening her fundraising net to young adults.

The students brainstormed and came up with online gaming.

“It’s become popular to stream on…Twitch,” DaSilva said. “There are a lot of charity streams. It’s like a telethon except you’re watching video games and you can donate while you’re watching.”

Ryan Cerrati, a 22-year-old Molloy senior majoring in business management, said students have been recruiting known players in the hope that they will draw a big audience and a lot of donations.

Players signed up for multi-hour blocks on Friday include “Cookeeeemonster,” a streamer with more than 58,000 followers, and “Rocky,” with more than 15,000 as of Friday.

Cerrati and DaSilva will serve as moderators.

Spencer said she doesn’t know what to expect from the Twitch program.

Magro said the foundations are working with specialists at each hospital to ensure that the PlayStation consoles are set up with parental controls and appropriate software for each child.

Magro, who works as a physician liaison at NYU Winthrop, said that the specialists may use the consoles to play games with children and initiate conversations to explain what the patient will be going through.

“It takes the fear out of the child,” she said.